or
Can't we all just get along? 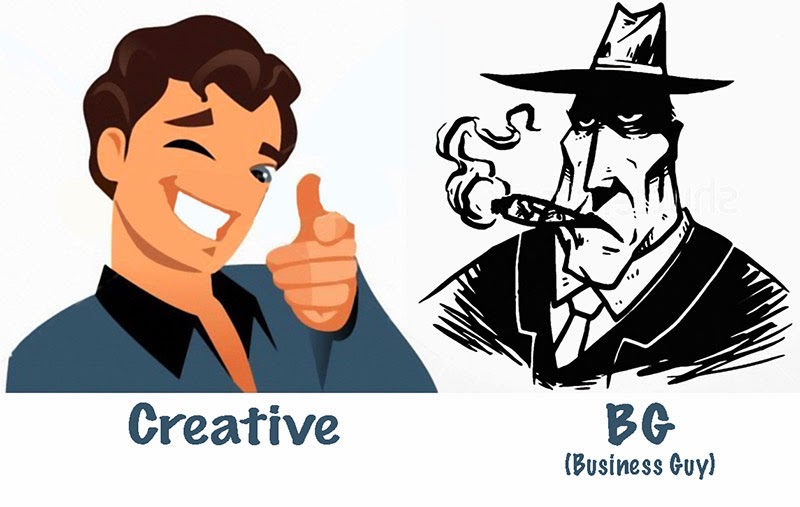 The age old battle of Creatives versus business people (BGs from here on) almost ranks up there with men versus women or cats versus dogs for epic conflicts.

Maybe it's a right-brain left-brain thing, or some kind of genetic hiccup that accounts for the profoundly different world views of these two distinct species.

Full disclosure: I'm a lifelong Creative. I'm happiest when I'm puttering around on my Mac or my iPad, or with one of my cameras, or strumming my guitar, or tinkering on some device that allows me the freedom to create.

But I have a lot of experience with BGs, having been at their mercy for most of my life.

I mean let's face it; if there were a gladiator match between a Creative and a BG, who do you think would win?

The Creative would be standing there worrying about whether his armor was throwing off too much glare from the stadium lights, or if the trim around the scoreboard might not look better in Pantone 485C, while the BG moved in and busily cut out pieces of his anatomy.

And how would the Creative fight anyway? Take a swing at the BG with his Wacom tablet? Poke him with his stylus?

One thing you have to learn (if you haven't already) is that BGs are ruthless. They have a laser sharp focus on their goal, and woe to anyone who gets in their way.

Every deal is designed for their - and only their - benefit, no matter what they tell you. And it must yield the desired result, be it money, power or something else. If you've ever seen an old episode of "Dallas," you have some idea of what I mean, just with ordinary looking people.

Creatives are chilled. And more, we actually look down on BGs because Creatives can, you know, do stuff. We are the writers and the painters and the composers and musicians and dreamers and poets. And while we're busy doing all that stuff, our overdrafts are getting larger and larger.

All BGs can do is some vague thing having to do with money. To their credit, though, they seem to be awfully good at it since they’re the ones who always seem to have the money, after all.

BGs are like the Green Berets. You drop them penniless and alone into a desert, and before you know it they've gone and built Caesar's Palace.

Creatives, on the other hand, would never get a place like that built. They'd get hung up arguing over what font to use in the logo, or what type of marble to make the pillars out of.

Creatives are also the easiest people to take advantage of.

Most of us Creatives don't understand why we have to work in the first place. In fact, we think we should be highly paid just because we're so darned talented. We consider it demeaning to have to do actual labor for money. For us to have to make an additional effort to collect the agreed upon fee after the project is finished is just adding insult to injury.

For your standard unscrupulous BG, what could be more perfect? BGs are only interested in money. Particularly the part where they get to keep more of it.

I once had a client who I thought was a friend. Unfortunately he was (unbeknownst to me) also a card carrying BG. We had a pretty loose arrangement in which he'd regularly send me work and I'd send him bills for payment on account. But after a while I noticed that he wouldn't let me tell him what each job should be costing him. It got to the point that, after a particularly complex project, I tried to tell him what he owed me. He literally ran out of my office yelling, "I don't want to know!"

I thought it was some kind of strange gag or odd personality quirk. I mean he kept giving me work and making payments. He couldn’t intend to shaft me, right? But his tab got higher and higher, well into the thousands of dollars. When I finally tried to settle up, I discovered that he had made up his own 'prices' that he was paying me, and as far as he was concerned he didn't owe me a penny!

Since we had been "friends" it never occurred to me that he'd ever take advantage of me. Needless to say I never got my money.

The only people who are safe doing business with BGs are other BGs. They can wheel and deal and chisel and drip slime on each other, and us civilized folks don't have to get messy.

Creatives, on the other hand, can be great people to work for. Since we hate working so much, we hate to make anyone else work hard either.

Instead of saying to the plumber/electrician/etc., "What?! $200 for fixing that whoosywhatsis?!" we say, "Wow! You did all that work for only $200? Are you sure it shouldn't be more? And can I get you a latte or some pizza as long as you're here?"

By no stretch of the imagination do I think Creatives are more "normal" or well balanced than BGs. Quite the contrary.

And I don't mean to imply that BGs are all soulless monsters whose only desire is to separate you from your money. Some of them have a soul! Or at least some have soul in the cultural sense. (But not music. That's only for Creatives.)

It's true, though, that as some of us Creatives mature from teenagers to young adults, which usually happens sometime in our late forties, we do start to appreciate the necessity (if not the value) of money. Bills have to get paid, kids have to be fed, and car payments have to made. And more importantly, by this point in our lives, we've run out of sympathetic clients who'll support our habit of buying the latest tech goodies.

And once in a very long while there arises a rare individual who embodies the traits of both species. And from gifted, inspired individuals like these we get an Apple or a Lamborghini. A company that produces works of art, and figures out how to get rich doing it.

As for us regular Creatives, maybe if we’re lucky we’ll get to design the stuff for some BGs’ next blockbuster mega-deal. And if we’re really lucky, maybe we’ll even get paid for it, too.

Danny Kay is a proud Creative, and a marketing and advertising professional as well as a designer and photographer with over 25 years of experience. He's worked with businesses and organizations of all sizes, up to Fortune 500.
He can be reached through his website, www.dannykaydesign.com, or at dannykay@outlook.com.